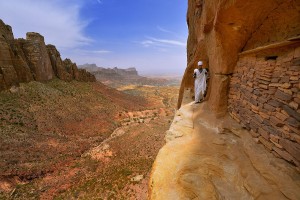 The Tigray region has plenty more, older ones, with more paintings, special architecture; remote locations….Over 125 rock hewn churches are recorded with Tigray-alone. These churches date from 4th-15th century. Most of them are visited around the Gheralta chained mountains. Others are found in eastern and southern Tigray.

Gheralta, northwest of Mekelle, the capital of Tigray, is the home of a quarter of the rock churches, some famous for their stone workmanship, ancient paintings and old manuscripts, and others known for their magnificent view and difficult ascent.

Gheralta, northwest of Mekelle, the capital of Tigray, is the home of a quarter of the rock churches, some famous for their stone workmanship, ancient paintings and old manuscripts, and others known for their magnificent view and difficult ascent. Some four hours drive from Axum-plus a further two hours, stiff uphill walk from the road ends — lies the monastery of Debre Damo, situated on a cliff top in one of the wildest part of Tigray.

The scenery of Gheralta is spectacular. The view of the graceful mount Gheralta and the far-reaching Hawzien plain is a rare combination of extraordinary beauty.

Wukro Cherkos Church – is a semi-monolithic church whose side walls, front wall and roof are completely separated and projecting from the main rock. It is attached to the rock only on its floor and at its back wall. The church is believed to have been carved during the 4th c. internal architecture and art works, rectangular carved columns of quartz-rich sandstone supporting arches and curved ceilings decorated by similar designs characterize this church. The presence of a sand stone slab with inscriptions of the Aksumite type in the vicinity of the church may also support the claim that the church dates back to Aksumite Period.

Abraha We Atsbeha – is located in one of the most scenic sites of the Tigrian Region. Considered among the country’s earliest churches, it is known for its extraordinary interior decoration as well as its magnificent murals. Its ceiling is decorated with sophisticated patterns and its walls are dotted by curved crosses. According to local tradition, the church was constructed in the 4th c, but some scholars estimate its date of construction to be the 10th c.

Abune Yemata (GUH)-Yemata is one of the most majestic and historical churches in Gheralta a village called Megab. It can be reached 5km drive from west of Megab and a further 30 minutes walk to the foot of the perpendicular rock mountains of Guh (name of the area). The interior of the church can be reached after climbing 5m tall vertical ascent where there are no ladders; no ropes and no hope if someone fall, and pass by a most terrifying narrow ledge carved in the cliff which is approximately 250m to 300m high. This rock is notable for its extensive and perfectly preserved wall and ceiling frescoes of Old and New Testament stories, thought to date from the 15th century. The annual festival is taken place on the 8th November.

Yohannes Maequddi – this rectangular chapel has six free standing pillars that support a ceiling carved with geometrical design. The church contains many early paintings which are thought to be at least 300 years old, and are very different in style to nay other church paintings found in Gheralta. The walls of the building are dresses with murals of saints and apostles; it is the intense atmosphere that most visitors remember. A visit to this site thus provides an opportunity to explore scenic beauty, unique centuries old rock-hewn churches together with old-graced lives.

Debre Maryam Korkor Church – is one of the biggest and most complex rock hewn churches of tigrai. It has three aisles and is five bays deep to sanctuary entrance. Architecturally it is one of the more complex structures, with many columns interesting shapes, with three cupolas spanning the five bays and Aksumite detailing. The layout follows the cruciform plan and there are numerous paintings on the walls of the columns, some faded, and in different styles. The priest with a chalice on one of the pillars is thought by one commentator to be Melchizedek, the martyr priest. On the blind arch there are scenes from early paradise with eve and the serpent, and the frescoes of birds and gazelles.

Debre Tsion (Abune Abraham) – it is architecturally most outstanding and entirely hewn from living rock. Inside this church among other things to see, the back wall panels are abundantly decorated with fine paintings of saints and Apostles. Especially the dome is beautifully adorned with patterns. The structure incorporates a dome like chamber decorated with many geometrical designs and carvings in relief depicting Angels and Saints. The monument I brief; a manifestation of great workmanship possesses the 15th c unique circular ceremonial fan.