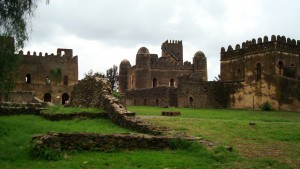 The Center of Ethiopian art and culture Gondar, founded by Emperor Fasilidas around 1635, is famous for its many medieval castles and the design and decoration of its churches – in particular, Debra Berhan Selassie which represents a masterpiece of the Gondarene school of art.–Famous though Gondar may be, however, no one knows exactly why Fasilidas chose to establish his headquarters there. Some legends say an archangel prophesied that an Ethiopian capital would be built at a place with a name that began with the letter G. The legend led to a whole series of sixteenth- and seventeenth-century towns – Guzara, Gorgora and finally Gondar. Another legend claims that the city was built in a place chosen by God. Apparently, He pointed it out to Fasilidas who was on a hunting expedition and followed a buffalo to the spot. –Flanked by twin mountain streams at an altitude of more than 2,300 meters Gondar commands spectacular views over farmlands to the gleaming waters of Lake Tana thirty-five kilometers to the south. The city retains an atmosphere of antique charm mingled with an aura of mystery and violence. An extensive compound, near its center contains the hulking ruins of a group of imposing castles like some African Camelot.

The battlements and towers evoke images of chivalrous knights on horseback and of ceremonies laden with pageantry and honor. Other, darker, reverberations recall chilling echoes of Machiavellian plots and intrigues, tortures and poisonings. –The main castle was built in the late 1630s and early 1640s on the orders of Fasilidas. The Emperor, who was greatly interested in architecture – St Marys in Axum was another of his works – was also responsible for seven churches, a number of bridges, and a three-story stone pavilion next to a large, sunken bathing place, rectangular in shape, which is still filled during the Timkat season with water from the nearby Qaha river.–Other structures date from later periods. Iyasu the Great, a grandson of Fasilidas, was particularly active. His castle, centrally located in the main compound, was described at the time by his chronicler as finer than the House of Solomon. Its inner walls were decorated with ivory, mirrors and paintings of palm trees, its ceiling covered with gold-leaf and precious stones. Now gutted, haunted only by ghosts, the intact turrets and towers of this fine stronghold reflect its past glory. –Iyasus most lasting achievement, was the Church of Debra Berhan Selassie, the Light of the Trinity, which stands, surrounded by a high wall, on raised ground to the north-west of the city and continues to be in regular use. A plain, thatched, rectangular structure on the outside, the interior of Debra Berhan Selassie is marvelously painted with a great many scenes from religious history. The spaces between the beams of the ceiling contain the brilliant wide-eyed images of more than eighty angels faces – all different, with their own character and expressions. The north wall, in which is the holy of holies, is dominated by a depiction of the Trinity above the crucifixion. The theme of the south wall is St Mary; that of the east wall the life of Jesus. The west wall shows important saints, with St George in red-and-gold on a prancing white horse.–Not long after completing this remarkable and impressive work, Iyasu went into deep depression when his favorite concubine died. He abandoned affairs of state and his son, Tekla Haimanot, responded by declaring himself Emperor. Shortly afterwards, in 1706, his father was assassinated on his orders. –In turn, Tekla Haimanot was murdered. His successor was also forcibly deposed and the next monarch was poisoned. The brutalities came to an end with Emperor Bakaffa who left two fine castles – one attributed directly to him and one to his consort, the Empress Mentewab.