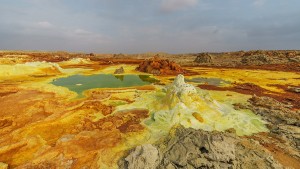 The Danakil Depression is a desert area in the Afar region of northeastern Ethiopia, north of the Great Rift Valley .

This is both the hottest region on earth averaged year round and one of the most geologically active.

Near the southern end of the Red Sea an immense, more or less triangular, depression descends far below sea level – some points near the ghost town of Dallol are nearly 116m below sea level). Known as the Danakil/Dallol Depression, the northern part is extremely hot and dry and an extension of the Great Rift Valley. In this seemingly inhospitable area live the nomadic Afar people who number about 3 million.

The whole Afar Depression is a plate tectonic triple junction where the spreading submarine ridges that formed the Red Sea and the Gulf of Aden emerge on land and meet the East African Rift. The Afar Depression is one of two places on Earth where a mid-ocean ridge can be studied on land. At present, the Afar is slowly being pulled apart at a rate of 1-2cm per year. The floor of the Afar Depression is composed mostly of basaltic lava. The Afar Depression and Triple Junction also mark the location of a mantle plume, a great uprising of the earth’s mantle that melts to yield basalt.

This place, which used to be part of the Red Sea, has kilometres of salt deposits. In some places the salt deposits are about 5km (3 mi) thick. Below many salt lakes are substantial sources of volcanic heat which causes hot water to rise through layers of salt and deposit anhydrites. Minerals also get dissolved and are deposited near the springs, and form shapes very much reminiscent (but smaller than) hornitos on basaltic lava flows. Sulphur, other minerals and possibly Thermopylae bacteria cause spectacular colours. Acid pools and deposits of salt, sulphur and other minerals at Dallol. This is a vast expanse of blisteringly hot desert with lava flows and salt plains and lakes that lie below sea level. Active and extinct volcanoes lie along a south—north axis with the extremely salty Lake Afrera, at 120m below sea level, kept alive by the many thermal springs feeding it.

Dallol — the lowest & hottest point on the planet

The Danakil Desert is located between the Ethiopian plateau and the Red Sea. The salt plain near Dallol is the lowest part at 116 meters below sea level. –In prehistoric times, the territory was in the form of a gulf. According to geologists, this is a sea bed that emerged for a brief moment in the history of the planet; the Afar depression will in fact form a future ocean with the Red Sea and the Gulf of Aden. –This geological anomaly means that the entire area is very unstable. There are numerous active volcanoes and frequent earthquakes, /together with secondary manifestations such as the stupendous colours of the salt surfaces, caused by the geysers with their various different chlorides. –This inhospitable territory is home to nomadic sheep-herding Afar people. –This tribe has a strong sense of its own identity and enjoys a notable degree of autonomy in its land. The Afar live from their animals, agriculture and the sale of salt that they extract from the salt lakes of the Danakil depression. The salt is loaded onto camels and sold in the markets of the highlands.

Dallol offers an opportunity to see the first signs of a new ocean basin forming. The Dallol volcano, the only volcanic crater below sea level on land, has remained dormant since 1926, as the seabed it will one day occupy gradually widens. South of Dallol, rectangular salt slabs are cut and transported up into the highlands in a near endless procession of camel caravans. The salt canyons south of Dallol Mountain are some of the most impressive geological features in the area. It looks like another planet because there are lots of colourful rocks in each metre of terrain. It looks like something out of a science fiction novel.

The town of Dallol, built from salt blocks and which almost straddles the Eritrean border to the east of the Tigrayan highlands, is officially listed as the hottest place on Earth, with an average annual temperature of 35 degrees Celsius and hottest daily temperatures topping 40°C year round. Much of this vast and practically unpopulated region lies below the driest and most tectonically active areas on the planet. The Danakil is an area of singular geological fascination. A strange lunar landscape studded with active volcanoes malodorous sulphur-caked hot springs. Solidified black lava flows. And vast salt encrusted basins. It is some measure of the Danakil’s geological activity that more than 30 active or dormant volcanoes roughly one quarter of the total as listed by the Smithsonian instituted global volcanism program. These volcanoes are all geological infants having formed over the past million years and with a great many taking their present shape within the last 10,000 years.

Location: Lat. 13.6N, Long. 40.7E–Elevation: 2,011 feet (613 m)–Erta Ale is a very remote and rarely visited shield volcano in the Afar region of East Africa. It is Ethiopia’s most active volcano and it has been in a state of continuous eruption since 1967. Daytime temperatures will likely be above 40 degrees Celcius and the base of the volcano actually lies below sea level and it’s summit rises up to 613 Meters. Erta Ale is known for it’s 2 pit craters which have had active lava lakes in the past. –Erta Ale has undergone seven eruption events in the past 125 years. Three of the early eruption dates, 1873, 1903, and 1904 are uncertain. However, 1906, 1940, 1960, and 1967 are well established events. Erta Ale has been erupting continuously since 1967. –Two new studies on Erta Ale have recently been published. Oppenheimer and Francis (1998) looked at the implications of long-lived lava lakes. They believe that Erta Ale’s lava lake has been active for at least the last 90 years (making it one of the longest known historic eruptions). Large amounts of heat are released by the volcano but the amount of lava that erupts is relatively small. Oppenheimer and Francis speculated that a higher magma density (caused by the cooling of the lava in the lake) inhibits eruptions. They proposed that most of the magma accumulates in the underlying crust in the form of dikes and sills. Since the Afar region is under extension, conditions are favorable for the injection of dikes and sills. –Barrat and others (1998) looked at the chemistry of the rocks at Erta Ale. Rocks range in composition from basalt to rhyolite. Barrat and others found that two mantle sources were tapped for the basalts: one similar in composition to the source for mid-ocean ridge basalts (called MORB by geochemists) and one similar in composition to the source for ocean-island basalts (called OIB). Their data did not show a significant contribution of sialic material from the continental crust.