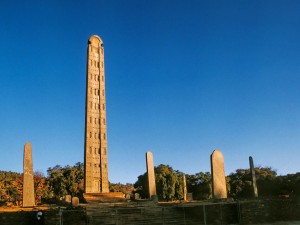 Axum, is a city in northern Ethiopia named after the long lived Kingdom of Aksum. Located in the Tigray near the base of the Adwa mountains, this town has an elevation of 2130 meters.AXUM, the site of Ethiopia’s most ancient city, is today a small town, ignorant of its glorious past. The 16th century Cathedral of St. Mary of Zion is built on the site of a much older church probably resembling that of Debre Damo, dating from the 4th century AD. Only a platform and the wide stone steps remain from the earlier structure. The Cathedral is the repository of the crowns of some of Ethiopias former emperors. According to church legend, it also houses the original Ark of the Covenant – thus making St. Marys the holiest sanctuary in Ethiopia.–Founded perhaps 500 years after the downfall of Yeha, together with its Red Sea port, Adulis. which were abandoned suddenly – probably in the sixth century AD as the result of an invasion from Arabia, and, much more is known about the historic highland city of Axum. Protected by the mountains of northern Tigray, Axum survived and kept on having a big influence on the imaginations and spiritual lives of many Ethiopians. –A small and lowly town surrounded by dry hills, modern Axum does not easily shows the evidence of the splendors of its glorious past. Its drab breeze-block houses, roofed with corrugated iron, look little different from those of any other highland settlement and its people seem remarkable only for their impassive stoicism. Part buried, however, but also part exposed, the extensive traces of noble buildings with large stone foundations are found there side by side with the ruins of even more impressive structures: temples, fortresses, and rich palaces. Adding substance to ancient legends of fire-breathing monsters and testifying to the lost truths embedded in myths and fables, the bones of bygone eras protrude everywhere through the soil. Even today, long- buried hordes of gold, silver and bronze coins are exposed by heavy downpours of rain.

Axum, was a great commercial civilization trading with distant lands, among them Egypt, Arabia, Persia, India and Ceylon. To countries such as these the ancient Axumites exported gold, ivory, rhinoceros-horn, hippopotamus hide and slaves, and imported all kinds of textiles – cottons and silks, as well as knives, swords and drinking cups, metal for local manufacture into all sorts of objects, and numerous luxury goods, including gold and silver plate, military cloaks for the nobility, olive oil and lacquer ware. –Testimony to the importance of this trade is to be seen in the Axumite currency, in gold, silver and bronze, which was inscribed either in Greek or Ge,ez, and issued for several hundred years by over twenty different Axumite kings. Most of this fascinating money was struck in the city, but other coins were probably minted at Adulis, as well as in South Arabia, part of which in the sixth century was under Axumite control. –Today a replica or symbol of the Ark of the Covenant, known as the tabot, occupies pride of place in the holy of holies of every Ethiopian Orthodox Church. These replicas – which derive their sanctity from their relationship to the true and original Ark still believed by Ethiopians to be kept at Axum – are so important that no church is considered consecrated without one.–Ethiopia’s claim to the lost Ark of the Covenant is a contentious one. Many do believe this priceless Old Testament treasure rests in Axum, exactly where the Ethiopians say it is. It seems likely, however, that the Ark arrived in Ethiopia in the late fifth century Bc, about 500 years after the time of Solomon, Sheba and Menelik, for completely different reasons from those set out in the national epic. There is some evidence that it was first installed on an island in Lake Tana where it remained for 800 years before finally being moved to Axum around the time of Ethiopia’s conversion to Christianity in the fourth century AD.

The Northern Stelae Field contains more than 120 stelae made of smooth, grey stone. The stelae are each made from single pieces of granite and stand as high as 82 feet. All the Axum stelae face south, and so watch the sun on its daily journey across the sky.

The Stelae were carved and erected in the city of Axum (in modern-day Ethiopia), probably during the 4th century A.D. by subjects of the Kingdom of Aksum, an ancient Ethiopian civilisation. The largest of the grave markers were for royal burial chambers and were decorated with multi-story false windows and false doors, while nobility would have smaller, less decorated ones. Although there are only a few large ones standing, there are hundreds of smaller ones in various stages of disrepair

The area of Axum is home to what was once seven large stelae, all decorated in the same style, with doors and windows and astral imagery at the top. The largest (still standing) is 21m high (70ft) but there were larger with the heaviest, now fallen and broken estimated to have originally weighed in at around 500 tons.