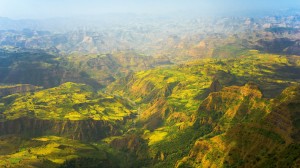 The Simien Mountain massif is a broad plateau, cut off to the north and west by an enormous single crag over 60 kilometers long. To the south, the tableland slopes gently down to 2,200 meters, divided by gorges 1,000 meters deep that can take more than two days to cross. Not enough geological time has elapsed to smooth the contours of the crags and buttresses of hardened basalt.–Simien Mountain National Park is located at the northern edge of the central plateau of Ethiopia, overlooking the Tekeze Gorges. It is part of the Simien Mountain Massif in Northern Ethiopia, which lies at elevations between about 2,000m and 4,620m, taking in Ras Dashen, the highest peak in Ethiopia, which stands adjacent to the park and the fourth highest in Africa.–The National Park itself, with a core area of around 140km2 and one of the smallest in Ethiopia, is located in the North Gondar zone of the Amhara National Regional State. It is 130 km from Gondar, the capital of North Gondar zone of Amhara region and about 882 km from Addis Ababa. It covers the highlands, ranging up to an altitude of 3,000 m ( with the peak of Bwahit Mountain at 4,430 m), and the lowlands, which lie at an average altitude of below 2,000 m. the steep escarpments separating these two significant landscapes were formed by volcanic activities and subsequent erosion millions of years ago. They give the mountain scenery its characteristic appearance, which is so spectacular for visitors today. Located at the Gondar- Axsum axis, which are both cultural world Heritage Sites on the so-called “Historic Route, you can reach the National Park by passing Debark, a market town on the road to Axsum and an important base for organizing trips to the National Park.–One of the main justifications for establishing Simien Mountains National Park at the time was the fact that the Simien area is the last stronghold of the Walia ibex (capra walie). This animal is a type of wild goat and the species, found only in the Simien, is the southernmost of its genus. The Walia habitat covers the steep areas of the escarpment as well as the grassy ledges where they need to feed and sun themselves in mornings and evenings. The aftermath of war, poaching, and the destruction of natural habitat has diminished the Walia population in the park to an alarming extent. Meanwhile efforts to protect natural habitat have shown first signs of progress. The number of animals

still living within and around the park boundaries has increased again from an estimated total of 200-260 in 1994 (according to Swiss research) to 400 today. The eastern and southeastern parts of the park around the Bwahit — steep sloping rocks over 2,400 m — are particularly good spots to see the Walia in its natural habitat, especially in the morning up to ten o’clock and in the late afternoon. However, not only the Walia makes Simien Mountains National Park a world heritage site.

The Simien fox or Ethiopian wolf (canis simiensis) is another highly endangered species endemic to Ethiopia. Until recent time, there was controversy as to the naming of this mammal. Today research has proved that this animal is neither a jackal nor a fox. It is rather a wolf. Hence, it is more correct to name it as Ethiopian wolf. The population within and around the park is estimated to be as low as 30-40, while the estimated total in the whole of Ethiopia does not exceed much more than 400 animals, which is an indication of the threatening situation for the Ethiopian wolf. Its habitat continues to shrink as demand grows for the Park’s high grass. This needs great attention for conservation. Other animals in the park are much easier to observe. It is impossible to enter the park without passing large groups of Gelada baboons (Theropithecus gelada).The Gelada Baboon, sometimes referred to as the bleeding heart Baboon, because of its bare bright red chest is the third endemic mammal of this park. With a little bit of patience and luck you might also see the Klipspringer (Oreotragus oreotragus), the Bush pig (Potamochoerus porcus), the Bush Buck (Tragelaphus scriptus), the colobus (colobus abyssinicus), grass rats, and other species. –More than 180 species of birds (6 endemic in the SMNP; one discovered recently in 1998) can be found in the Simien Mountains, the most famous being the wattled Ibis , the Lammergeier, the thick-billed Raven and the Towny eagle. The escarpments and lowland areas in particular are ideally suited to observing various species of Birds. –Simien Mountains National Park is the largest virtually natural habitat island in the Ethiopian Highlands, and its surrounding cliffs and lowlands act as an ecological barrier allowing the ecosystems to evolve almost independently. –Therefore, in addition to this interesting fauna, the Simien also boasts a wealth of fascinating flora. Generally, the vegetation in the Simien area is characterized by three different altitudinal belts. These are Afro alpine, Ericaceous and Afromontane forest belts. –The Afro alpine steppe belt is above 3700 m above sea level. This altitudinal belt is famous for the occurrence of the Giant Lobelia (Lobelia rhynchopetalum) and is rounded off with a colorful patch work of red and yellow flowers comprising the so called ” red hot poker” (Kniphofia Foliosa and Kniphofia pumila). This is also the belt where silvery or yellow straw – flowers called ” Everlastings ” (eg. Helichrysum Citrospinum) which flower in the dry season are found.–Inside the Ericaceous belt, between elevation of 3000 and 3700m., the most interesting is the Erica-Hypericum communities composed of the Giant St. Johns Worth (Hypericum Revolutum) and the Giant Heath (Erica Arborea). Another remarkable plant native to the Simien and common at this altitude is the Abyssinian Wild Rose (Rosa Abyssinica), whose characteristic ivory white flowers can be admired especially during the dry season. Still in the list of exceptionally large plants at this belt is the Giant Sphere Thistle (Echnopes Longisetus).–The belt ranging from 2000m-3000m is called the Afro Montane forest belt. More than about 100 species of trees can be found here and the bio diversity is generally much higher than on the highland plateau.