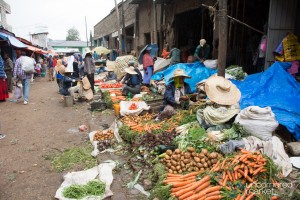 The third –highest capital city in terms of altitude in the world, Addis Ababa is the largest city of Ethiopia as well as the country’s commercial, manufacturing and cultural center. It is situated in central Ethiopia at an elevation of about 2440m above sea level on a plateau that is crossed by numerous streams and surrounded by hills. Climatically, this city is a highly encouraging introduction to Ethiopia: characterized, throughout the year, both day and night, by comfortable temperature weather. Situated at 400 longitude 80 latitude, the city has an annual average rainfall of 1,153 mm with an average temperature of 160c.

The modern city was founded in 1887 by Emperor Menilik II at the site of a hot springs. It was given the name ADDIS ABABA which in Amharic means “NEW FLOWER.” The city became the national capital in1989. Addis Ababa also known as the capital of Africa by hosting many international organization headquarters, UN for Africa (ECA), the AU (African union) and other Diplomatic mission for Africa.

Addis Ababa’s cozy espresso bars and patisserie are reminiscent of Rome and the Mediterranean, and its bustling outdoor markets are colorful reminders of more traditional ways of life. The people, the bursts of music from cafes and shops, the pungent aromas of spicy cooking, of coffee and frankincense all serve to form a unique Ethiopian elegance. Moreover, Addis Ababa is also one of the few African cites whose vicinity offer a wide vary of exceptional day trips.

This comprises of many archaeological and historical findings, from Ethiopian history, art and culture. The museum is a home of the famous complete female hominid fossil remains of “Lucy” locally known as Dinknesh meaning “wonderful”. Discovered in 1974 in Hadar on the banks of the Awash River, her scientific name is Australopithecus Afarnses, she is dated back to 3.2 million years the most complete hominid yet discovered.

It is located in the main campus of Addis Ababa University by the Institute of Ethiopian Studies with the aim to preserve the country’s historical and cultural heritages. This is Ethiopian’s first and only ethnological museum exhibiting the physical environment and traditional artifacts of all major ethnic groups (including costumes, jewelry, traditional house hold goods, farming implementation, military and hunting weapons, art, traditional musical instruments, both Christian and Muslim parchments manuscripts, icons, medieval painting and various processional and hand crosses ). The building was once Emperor Haile Selassie’s palace, so it offers a unique opportunity to see his majesty bed room and a glimpse how Ethiopian royal used to live.

This octagonal church, which was built by Emperor Menilik II in 1896 in commemoration of Ethiopian victory over the Italian invaders at the Battle of Adwa. Here also you will visit paintings by the world Laureate Mater Artist, Afework Tekle, which decorated the interior wall, and glass window of the church and other ecclesiastical royal and cultural heritage of the past are displayed in cathedral’s small museum within the compound.

This magnificent piece of architecture was built in 1913 to house the elaborated marble tombs of Emperor Menelik II (1844-1913). An active church, the mausoleum is also the final resting place of Empress Taitou (1851-1918), Menelik II’s wife, and Empress Zauditu (1876-1930), who ruled Ethiopia after her father’s death. Still in use as a church, the mausoleum temporarily held the remains of Emperor Haile Selassie after they were recovered in 1990 and Princess Tsehai Haile Selassie. High up on the hill that overlooks the city, two lion statues guard each entrance to the mausoleum.

It is the highest peak in north of Addis Ababa with an altitude of 3200 meter, was the site for the first palace of Emperor Menilik II. Here one can see a small but fully displayed church museum that shows articles of historical significance, denoted by members of royal family, foreign diplomats and individuals, as well as Saint Mary Church where Emperor Menilik II crowned as Emperor of Ethiopia in 1882, the palace of Menilik with the panoramic view of Addis Ababa during late afternoon is best time for stunning sunset with its surrounding eucalyptus forests and breathtaking air.

It is the largest open-air market in Africa, trying to convey the feeling of Merkato with a description is like attempting to portray an ocean with a cupful of water. It is a concentration of all that is Ethiopian with everything from around the world thrown in to add to its cacophony of colors and endless stalls of objects. Merkato is not only Addis Ababa’s commercial centers; it is the dynamo of the country’s development in tread and industry, fascinating glimpse of the very vast range of goods and artifacts available from all parts of the country and one can enjoy the Ethiopian trade exchange tradition in the open-air and can purchase anything you need.